Red Square is a city square in Moscow, Russia. It separates the Kremlin, the former royal citadel and currently the official residence of the President of Russia, from a historic merchant quarter known as Kitai-gorod. Red Square is often considered the central square of Moscow since Moscow's major streets, which connect to Russia's major highways, originate from the square.

The name Red Square neither originates from the pigment of the surrounding bricks nor from the link between the colour red and communism. Rather, the name came about because the Russian word красная(krasnaya), which means both "red" and "beautiful," was applied to a small area between St. Basil's Cathedral, the Spassky Tower of the Kremlin, and the Lobnoe Mesto, and Tsar Alexei Mikhailovich officially extended the name to the entire square, which had previously been called Pozhar, or "burnt-out place", in reference to the fact that several buildings had to be burned down to make place for the square.

The East side of the Kremlin triangle, lying adjacent to Red Square and situated between the rivers Moskva and the now underground Neglinnaya River was deemed the most vulnerable side of the Kremlin to attack, since it was neither protected by the rivers, nor any other natural barriers, as the other sides were. Therefore, the Kremlin wall was built to its greatest height on this side, and the Italian architects involved in the building of these fortifications convinced Ivan the Great to clear the area outside of the walls to create a field for shooting. The relevant decrees were issued in 1493 and 1495. They called for the demolition of all buildings within 234 metres of the wall.

The square was called Veliky Torg (Great market) or simply Torg (Market), then Troitskaya by the name of the small Troitskaya (Trinity) Church, burnt down in the great fire during the Tatar invasion in 1571. After that, the square held the name Pozhar, which means "burnt". It was not until 1661–62, when it was first mentioned by its contemporary Krasnaya – "Red" name.

During the expulsion of Poles from Moscow in 1612, Prince Dmitry Pozharsky entered the Kremlin through the square. In memory of this event, he built the Kazan Cathedral – in honour of the Kazan Icon of the Mother of God, followed his army in a campaign.

At the same time (1624–1625), Spasskaya tower received contemporary tent roofs. This was done on the proposal and the draught of Christopher Galloway from Scotland, who was summoned to design the new tower's clock and suggested the arrangement of the tent roof over the clock. In the mid-century a gilded double-headed eagle was set on top of the tower. After this, the square became known as Krasivaya ("beautiful").

In the late 17th century (1679-1680) the square was cleared of all wooden structures. Then all Kremlin towers received tent roofs, except Nikolskaya. One tent was erected on the wall above Red Square (the so‑called Tsarskaya Tower, so that the tsar could watch from this spot the ceremonies in the square). Tent roofs were also constructed at Voskrerensky (Iberian) gates, arranged in the wall of Kitai-gorod. These were the fortified gates at Voskresensky Bridge over the River Neglinnaya.

In 1697 and 1699, gates on both sides of Voskresensky Bridge were rebuilt into large stone buildings: the Mint and Zemsky prikaz (department in charge of urban and police matters). Zemsky prikaz was then known as the Main Pharmacy, founded under orders of Peter The Great. In 1755 the first Russian University was originally housed in the building of Zemsky prikaz, before moving to the better known building on Mokhovaya street further across Manege Square. At the same time the (by then already drained) Alevizov moat was used as a state Pharmacy's garden for growing medicinal plants.

In 1702, the first public theatre in Russia was built near the Nikolsky gate; It stood until 1737, when it was destroyed in a fire. In the 1730s, a new mint building, called the Gubernskoye pravlenie (Provincial Board), was built in front of the old one.

During her reign, Catherine the Great decided to make improvements to the square. In 1786 the upper floor of the market lines was made of stone. This line was built on the opposite side of the square, near a moat between the Spasskaya and Nikolskaya towers. Then architect Matvey Kazakov built (in the old forms) the new Lobnoye mesto of hewn stone, slightly West of the place where it was before.

In 1804, at the request of merchants, the square was paved in stone. In 1806 Nikolskaya Tower was reconstructed in the Gothic style, and received a tent roof. The new phase of improvement of the square began after the Napoleonic invasion and fire in 1812. The moat was filled in 1813 and in its place, rows of trees were planted. The market Line along the moat, dilapidated after the fire, had been demolished, and on the Eastern side, Joseph Bové constructed new building of lines in the Empire style. In 1818 the Monument to Minin and Pozharsky, was erected, symbolising the rise in patriotic consciousness during the war.

In 1874 the historic building of Zemsky prikaz was demolished. In its place the Imperial Historical Museum was built in pseudo-Russian style. After Bové's lines were demolished, new large buildings were erected between 1888 and 1893, also in the pseudo-Russian style: upper lines (Gum department store) and middle lines. The upper lines were intended for retail sale and together in fact comprised the first department store in Moscow. Middle lines were intended for wholesale trade. At the same time (in 1892) the square was illuminated by electric lanterns. In 1909 a tram appeared on the square for the first time. 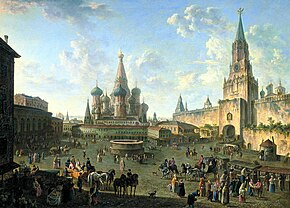 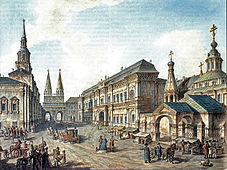 During the Soviet era, Red Square maintained its significance, becoming a focal point for the new state. Besides being the official address of the Soviet government, it was renowned as a showcase for military parades from 1919 onward. Lenin's Mausoleum would from 1924 onward be a part of the square complex, and also as the grandstand for important dignitaries in all national celebrations. In the 1930s, Kazan Cathedral and Iverskaya Chapel with the Resurrection Gates were demolished to make room for heavy military vehicles driving through the square (both were later rebuilt after the fall of the Soviet Union). There were plans to demolish Moscow's most recognized building, Saint Basil's Cathedral, as well to make way for a larger Red Square, as well as the State Historical Museum. The legend is that Lazar Kaganovich, Stalin's associate and director of the Moscow reconstruction plan, prepared a special model of Red Square, in which the cathedral could be removed, and brought it to Stalin to show how the cathedral was an obstacle for parades and traffic. But when he jerked the cathedral out of the model, Stalin objected with his rather famous quote: "Lazar! Put it back!".

Two of the most significant military parades on Red Square were November 7, 1941, when the city was besieged by Germans and troops were leaving Red Square straight to the front lines, and the Victory Parade in 1945, when the banners of defeated Nazi armies were thrown at the foot of Lenin's Mausoleum.

The Soviet Union held many parades in Red Square for May Day, Victory Day, and the October Revolution, which consisted of propaganda, flags, a labour demonstration, and a troops march and show off of tanks and missiles. On Victory Day in 1945, 1965, 1985, 1990, and 2015 there were military marches and parades as well.

On May 28, 1987, a West German pilot named Mathias Rust landed a Cessna 172 light aircraft at St. Basil next to Red Square, causing a major scandal in the Soviet Air Defence Forces.

In 1990 the Kremlin and Red Square were among the very first sites in the USSR added to UNESCO's World Heritage List. Paul McCartney's performance there was a historic moment for many, as The Beatles were banned in the Soviet Union, preventing any live performances there of any of The Beatles. The Soviet Union also banned the sales of Beatles records. While McCartney's performance was historic, he was not the first Beatle to perform in Russia. Former Beatle Ringo Starr and His All Starr Band performed at Moscow's Russia Hall in August 1998.

In January 2008, Russia announced it would resume parading military vehicles through Red Square,although recent restoration of Iverski Gate complicated this, by closing one of existing passages along Historical Museum for the heavy vehicles.

In May 2008, Russia held its annual Victory day parade, marking the 63rd anniversary of the defeat of Nazi Germany in World War II. For the first time since the collapse of the USSR in 1991, Russian military vehicles paraded through the square. On December 4, 2008, The KHL announced they would be holding their first all-star game outdoors on January 10 at Red Square.

On May 9, 2010, to commemorate the 65th anniversary of the capitulation of Germany in 1945, the armed forces of France, the United Kingdom, and the United States marched in the Moscow Victory Day parade for the first time in history.